The Samsung SGH-T429 is a T-Mobile exclusive mobile phone by Samsung, released in the third quarter of 2007.

It was sold as a basic entry-level phone, and looks nearly exactly the same as a Samsung SGH-E250, besides lacking a microSD card slot.

Like many Samsung feature phones of this time period, it runs on the NXP "Swift" SoC platform.

The T429 is extremely similar to the SGH-E250 (more specifically the E250D) down to the board color, placement, SoC used, and the flex cable issues from the E250 have also carried over to the T429. 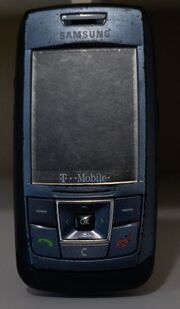 Phone slid up and on

There are several firmware dumps known of this phone, but since there was only 1 firmware version released to the public, they are all version T429UVHC1.

However, in the T429 service manual, the screenshots where the user demonstrates flashing firmware to the phone, the file is named T429UVGD1.[2]

Retrieved from "https://lpcwiki.miraheze.org/w/index.php?title=Samsung_SGH-T429&oldid=467"
Categories:
Cookies help us deliver our services. By using our services, you agree to our use of cookies.