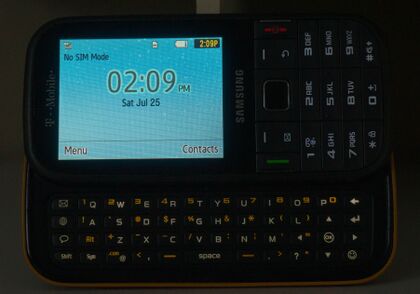 A Samsung Gravity TXT SGH-T379 with QWERTY keyboard slid out

The Samsung Gravity TXT, also known as the Samsung SGH-T379 is a T-Mobile exclusive messaging phone by Samsung, released in the third quarter of 2011.

The phone has an optical joystick which sets it apart from the other phones in the Gravity series. It also has a normal 3.5mm headphone jack, something uncommon in other Samsung feature phones from this time.

Cosmetically, it's mostly grey with a slightly rubberized back, but the sides and keyboard can come in 2 different colors (orange and cyan).

As with many Samsung phones of this time, it is Swift SoC based.

Adobe Flash .SWF support isn't documented anywhere at all in the phone's user manual. However, the phone does have Adobe Flash Lite included, which allows Flash content up to version 7 to run.[1]

.XMF file support isn't official on this phone. Most of the system sounds are .XMF files, which means the device can play that file format. However, when you try to play .XMF files on an SD card, it will display an "Unsupported File" message. XMF files can be played with some steps.

To play XMF files, first play an officially supported file type (like .MID), and then navigate to the .XMF file using the optical joystick. If the XMF file is valid, it will start playing.

These are codes entered on the dial screen which can open up more hidden features like debug options. Such strings can be found on dumped firmware by searching using a hex editor. 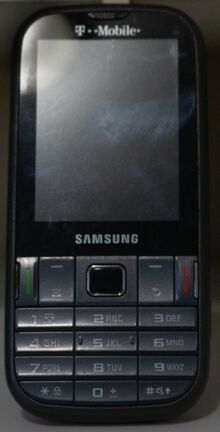 Gravity TXT closed and powered off 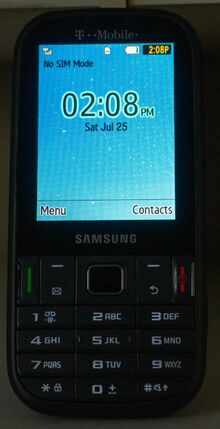 Gravity TXT on but without keyboard exposed

Only 2 firmware dumps are known to exist. One is a .OCT file intended for "Octoplus Box", and another is a bad dump of the same firmware version. Both are versions T379UVKF9. For content extraction, the .OCT file is useless as it is encrypted.

An ongoing effort to decrypt the .oct file has uncovered that it contains multiple files in one. The .ptt file is the only valid file uncovered so far, but it does give some pointers to how many files there are in its original format.

There are several partitions in different files, all of which will be named here.

Another potential point of interest is something called "device_public_key_modulus". Currently unknown what it's for as of now.

Retrieved from "https://lpcwiki.miraheze.org/w/index.php?title=Samsung_SGH-T379&oldid=498"
Categories:
Cookies help us deliver our services. By using our services, you agree to our use of cookies.