A Samsung T309, powered on and flipped open

The Samsung SGH-T309 is a T-Mobile exclusive flip phone by Samsung, released in the third quarter of 2005.

The phone was comparable in feature set to the Samsung SGH-E335, another T-Mobile exclusive Samsung phone.

It has a grey and black plastic surrounding it, with silver-colored plastic buttons.

The design is very similar to the Samsung SGH-X495.

This was one of the very first "Swift Platform" Samsung mobile phones to exist, featuring an SoC made by Philips, and as a result, has a Yamaha MA-3 synthesizer instead of the "Swift" software synthesizer.

A firmware dump of this phone can be found on several different websites, but since there was only 1 firmware version ever made for the T309, all of these are version T309UVEI1. 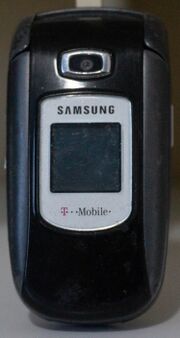 Samsung T309, closed
Retrieved from "https://lpcwiki.miraheze.org/w/index.php?title=Samsung_SGH-T309&oldid=359"
Categories:
Cookies help us deliver our services. By using our services, you agree to our use of cookies.