The Samsung SGH-P207 is a mobile phone by Samsung, released in the first quarter of 2005.

The phone was most notably featured for it's voice-to-text features, and was the first of its kind in the U.S.[1]

It came in two colors, those being black and white. Both color variants have a glossy finish.

Unlike other Samsung phones at the time that used Yamaha MA-3 or MA-5 sound chips, this phone uses an NEC uPD9993 sound chip which sounds very similar to the softsynth found in Qualcomm-powered mobile phones with BREW 3.0 runtime.

Software-wise, this phone is very similar to the SGH-E620, which was released the same year and also has voice-command functions. On account of this, the P207 is presumably a North American version of that phone.

When the P207 was first introduced, people had quickly discovered that Cingular had locked down the data transfer capabilities of the phone greatly. You can connect the phone to your PC with a PCB113BSE or PCB113BDE cable and it will open a modem port on your computer, but connecting this to the Samsung PIM & File Manager program gives you no real access to the phone. File Manager is blocked, so you can't take pictures or sounds from the phone and you can't put sound / picture files on the phone.[2]

In the single firmware image available on the internet as of now, when converted to .bin, there are strings at 0x8890FC that seem to be intended for an Optimay program (potentially OptiFlash)

This gives away the build date of this firmware image. Even though it's listed in the "features" of this string, this phone doesn't have any IrDA capabilities.

There is another weird string with an unknown purpose in the phone's firmware. It reads:

It's unknown what this would have been used for, if anything.

With the proper drivers installed, both a modem port and a COM port appear on a computer when the phone is connected. The modem port is used to communicate with programs like EasyStudio and can also accept AT commands, but the COM port's purpose is unknown. When the COM port is selected in a terminal program like puTTY, debug strings about the phone are printed out depending on what it is doing. When the phone screen dims and shuts off, it prints out "MILC_BackLightTimerExpiry - mmiSetBacklight(BACKLIGHT_DIM)".

There is only 1 known firmware dump of this phone on the internet, of which is firmware version P207UCEC5.

Currently there's no firmware dump of the ROGERS version on the internet at all. 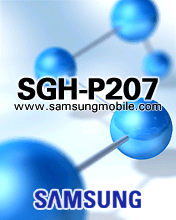 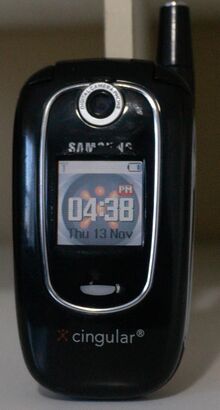 Cingular P207 closed and powered on

Retrieved from "https://lpcwiki.miraheze.org/w/index.php?title=Samsung_SGH-P207&oldid=813"
Categories:
Cookies help us deliver our services. By using our services, you agree to our use of cookies.