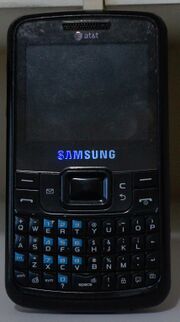 The Samsung SGH-A177 is an AT&T exclusive keyboard "bar" phone by Samsung, released in the first quarter of 2009.

It was sold as a basic entry-level phone on AT&T's now discontinued GoPhone plan (AT&T's prepaid service is now referred to as simply AT&T PREPAID).

Cosmetically, the phone is black and grey with a textured pattern on the back cover. The user interface is simplistic and minimalist with not many shaded elements like found in earlier Samsung phones.

However, like many Samsung feature phones of the time, it runs on the "Swift" SoC platform.

The A177 was also sold as the Samsung SGH-A257, or Samsung Magnet. Besides some small cosmetic differences and a lack of prepaid software, these phones are virtually identical.

The Samsung Magnet also uses an NXP branded PNX6511 SoC compared to the ST-Ericsson branded one found on the SGH-A177.

There are several firmware dumps known of this phone on the internet, but since there was only 1 firmware version released to the public, they are all version A177UCIC3.

Retrieved from "https://lpcwiki.miraheze.org/w/index.php?title=Samsung_SGH-A177&oldid=410"
Categories:
Cookies help us deliver our services. By using our services, you agree to our use of cookies.