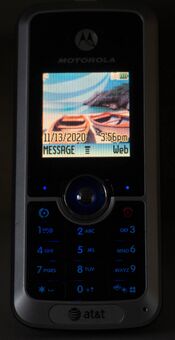 The Motorola C168i is an AT&T exclusive basic "bar" phone with Motorola branding released in 2005.

It was sold as an entry-level phone on the discontinued GoPhone plan (GoPhone was replaced with AT&T PREPAID).

The C168i is quite small, and looks somewhat similar to the Motorola C139, another basic entry-level phone with the Motorola brand.

While the phone does have Motorola branding and a very P2k-like user interface, it was actually manufactured by an Original Design Manufacturer (ODM) known as Compal. Compal also goes by Compeq, and they made the C139 as well.

The 2.5mm headphone connector on the phone also acts as a serial port. When connected, AT modem commands can be sent to the phone.

Many commands about information weren't changed from the Compal originals. For example, AT+CGMM (request model info) returns "TTA-000", when something like "C168i" would be expected.

Because of this easy access and the relatively low price of this phone, the C168i has been used in many[1] hacking[2] projects.[3]

Retrieved from "https://lpcwiki.miraheze.org/w/index.php?title=Motorola_C168i&oldid=764"
Categories:
Cookies help us deliver our services. By using our services, you agree to our use of cookies.